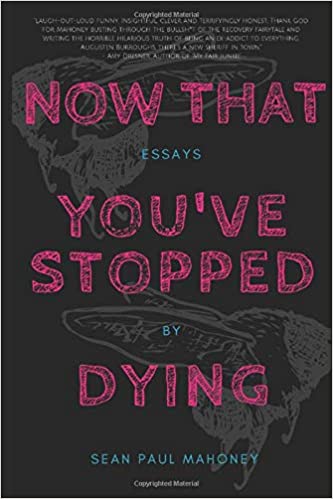 “When I picked up my one year sober chip, I burst into tears. I did it. I made to a year. Life would all get easier. The money, the jobs, the men. It would all come now that I finished something and made it to a year!

Uh. Yeah. That did not happen. In fact, most everything got harder. I was a person who avoids feelings, responsibilities and yes, finishing anything and so now that I was sober all of it was waiting for me. Everything I didn’t want to deal now had to be dealt with. Terrific. This felt at direct conflict from people, films and books were saying. I was promised a shiny, easier sober life, damnit. This sober life that I got was hard, messy and kind of a shit show. I wanted a refund and needed to speak to the manager. Who knew that dealing with life without something (or a lot of somethings) to take off the edge would be this hard?

This is what I started writing about back in 2011. I had two years sober and didn’t know it was all going to be so damn difficult. I was getting paid to write random blog posts and web content and was basically grateful to be alive and doing something I loved my whole life.  In the meantime, me and a small group of folks blogged about what it was like to stay sober. We connected. We liked each other’s posts. We commented. We laughed. A lot. But it wasn’t the heavily sponsored, click baity digital world of recovery today. Just some drunks and addicts sharing their stories. Lots of other people found my work during this time frame too. Normal drinkers, people with mental illness and for some reason a niche audience of people who suffered from traumatic brain injuries, even though I don’t have a TBI.  The TBI people were very courageous with big senses of humor.  It’s not lost on me that a person like myself who tried on his own to destroy his brain learned a lot from people who overcame their own neurological challenges.  I am extremely grateful for all the sober people I met online during that time too. We were little lighthouses in the electronic void and we bleeped and flashed our spotlights so we wouldn’t feel alone. I mainly wrote about being sober but still feeling kind of awful. I wrote about trying to figure out how to grow spiritually while still hating everyone. Mainly, I tried to write honestly about where I was.

I have struggled with honesty my whole life as addict so my blogs were a way to come clean. I would even like to say that they helped me embrace the truth about who I am but even that wouldn’t be 100% honest. Embracing honesty sounds hard and potentially smelly. Like I don’t want to embrace anything that isn’t warm cuddly and a total escape. Thus the best I can say is blogging helped me moved closer to the truth, which is also the name of a decent Cher record.

Luckily, it’s been a journey that others are on too. Turns out life didn’t magically get better for people who successfully quit drinking. Trying to tell the truth one blog post at a time, one essay at a time, has connected me to other writers, readers and people in recovery around the globe. The weirdest, saddest, most beautiful chapters of our collective lives were happening after hitting bottom and thank god we had each other to share it with.

All of this leads us to where you are now: reading this book. Basically 40 some essays about me rambling about trying to stay sober while dropping as many pop culture references as possible, I hope this book that it’s really about what happens next. What happens next is a life that’s messy, sad, hilarious and certainly unfinished.” – from Now That You’ve Stopped Dying

“Laugh out loud funny, insightful, clever and terrifyingly honest, Now That You’ve Stopped Dying, lays out the unspoken truth of what life’s like AFTER you get sober. Thank God for Mahoney busting through the bullshit of the recovery fairytale and writing the horrible hilarious truth of being an ex-addict to everything. Augusten Burroughs, there’s a new sheriff in town.” — Amy Dresner, author of “My Fair Junkie: A Memoir of Getting Dirty and Staying Clean”