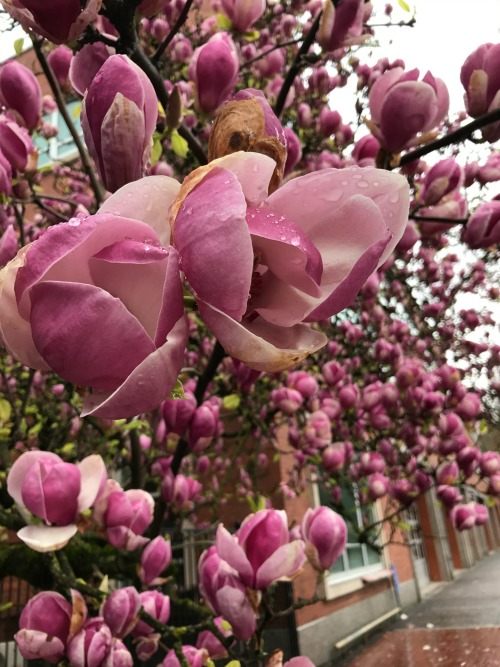 I woke up yesterday with a really strong feeling that I had to get going. I needed to leave. I wanted to get out. While I’m not currently punching a time clock and not really expected to show up anywhere (other than by the food dish to fill the bellies of my feline monsters), yesterday I just needed to go. A couple of weeks ago, I spied some cherry blossom trees in bloom down by the waterfront and for some reason, I really wanted to check them out. You know you’re reaching a certain age when a seasonal floral event is a “rouse you out of bed” sort of thing. Whether it was my age or an itch to see something springtime-ish, I just knew I had to GTFO. So drizzle be damned, I hightailed it over to the waterfront park.

Yet when I got there it looked as if the poor trees had been crying pink tears. The path beneath them was dotted with petals. These lush blush-colored beauties were now mostly spring green and didn’t exactly offer up an apology for not living up to my geriatric, floral fantasy. Might as well walk the “floating bike path” was my thought. Okay. I didn’t know that it was even called a floating bike path until the bearded guy with a ponytail  told his bike tour group that’s what it was called. He also said it was the largest floating bike path in North America. So there you go. Armed with that little nugget of trivia, I marched forward. After coming from the driest winter in Colorado in quite some time, I’m still in love with the romance of walking in the rain. It’s still lovely and cinematic. Check in with me next year and I’ll let you know I how I feel but for now I’m happy to slosh around town in my boots.

While the natural beauty was sleepier than I had expected, I wasn’t bored visually. Portland has this rad mix of super industrial steel and old bridges mixed with flowering trees and leaves so green they look like Kermit decorated the joint. It’s man-made meets nature and they oddly seem to get along and even look fantastic together. Like the section of the path that runs parallel with the train tracks. As I walked it yesterday, a train was rumbling by while the water on the other side of me stayed calm and unimpressed. Standing there snapping photos, my body rocked back and forth. Soon, whatever I was thinking about was drowned out by the sound of train. It was exhilarating and meditative at the same time, if that makes any sense. Either way, I ‘m pretty sure some old cherry blossoms couldn’t pull that off.

Splashes of street art were guideposts as I continued walking. Locks placed on the fences, Sharpie written declarations of love and perfectly placed illustrations all blended in as if they were meant to live there too.

Walking, as I’ve mentioned before, is sort of my magic potion. I haven’t been feeling depressed lately but maybe a little lonely since the hubby’s not around for me to annoy. Also, the sluggishness of relocating has certainly taken its toll too. So moments like this one, doing something I love and doing it alone, that need to be hung on and slipped into my pocket. A very satisfied looking goose just hanging out on a log by himself, whom I bumped into a little further down the path, seemed to confirm this.

An hour into my journey, I’d forgotten what had brought me there in the first place. I was calm and happily exhausted/hungry. I decided to call it and head back home. On my way past a firehouse nearby the waterfront, there it was: the reason, the emergency that made me leave my warm, toasty house.

Fragrant and a candy color of pink I want my whole life to look like, there was a row of flowering trees with no one around. This private natural art show was on view in an unexpected place and I couldn’t be more thrilled.  I sniffed them and took a ridiculous amount of photos as the nonplussed firemen on their way into the station gave me a smirk and a “What Up, bro” head nod.  This little blooming surprise was the emergency I woke up for.  I just didn’t know it at the time.

Several hours later, the news of the US bombing Syria hit. While not unexpected, it certainly falls under the holy fuck category of things. Violent, depressing and sure to open a can of worms, this was a real emergency. The thought of the civilians taken out by such an action churns my stomach. It’s the kind of news that made me head to bed early and watch stupid Food Network Shows until I passed out.

In a post-news, pre-coffee haze, the thought hit me this morning, maybe things like enjoying nature, hanging out with friends, reading, laughing and walking are vital in times like ours. My time here on this little rock is limited and I want to squeeze in as much amazing as possible. Sure, to look the other way and pretend everything is just fabulous isn’t a cool way to live your life. Acting oblivious to the world around me has never, ever done me any favors. But I also refuse to spend my days huddled in fear and feel victimized by every piece of terrible news. My only option? To take all of it seriously, to help people when I can, to laugh when I can and to get out and enjoy beauty. Especially when it feels like an emergency.

Before I go much further, I should take a minute to call bullshit on myself. I am the first person to roll eyes at exercise posts or nutrition posts or articles on how someone stopped being a prick for ten minutes and is now the light of the world. I think a lack of humility about basic, human and humane actions is part of our collective problem. We’re not horrible for 20 seconds and we expect a humanitarian award. Sigh. That being said I love walking. And, I will say this right here, I was wrong for making fun of people who post how great whatever exercise they love has saved their life. I think anything that makes us happy and doesn’t hurt other people is solid gold. So I’m a judgmental jerk and I’m sorry. I’ve never really loved driving and proudly say that I am a non-car owner and have been for awhile. I try to centralize my life so I can walk everywhere. Yes, it’s good for the environment. Sure, it’s good for my body. But mainly I walk because it helps my head.

Walking the crazy off is a vital component in helping me be a less horrible human. A couple of years ago, I slipped into a pretty dark depression. I talked to my doctor at the time and I told her I was open to medication but I’d like to explore other options first. I already take an Elvis sized handful of meds just to keep my body running so I didn’t want to add another pill. Now, do not take this as an anti-psych meds stance. The opposite, actually. If you have a chemical imbalance that cannot be fixed any other way, for the love of God man, take your effing meds. Seriously, humanity will thank you for it. My depression, however, is a bump in the road of my larger mental health picture. And oh what a picture it is. What I’m getting at here is my depression has never gotten bad enough that I felt like meds needed to be part of the story. Until that summer. She, my doctor, then asked me a bunch of questions. What’s happening in my personal life? How’s my family? Which of my routines have changed? Insert giant lightbulb emoji here or a picture of a gate in my alley I took, whatever works.

I realized in that moment that what had changed is my walking routine. Whereas I used to walk 40 minutes to and from work I was now only walking about 6 minutes. She recommended that I up my walking and start journalling about my depression(don’t expect that one on the Amazon editors pick anytime soon, by the way)and get back to her. If nothing changed we’d talk about medication. Flash forward 40 days, things had changed. I was walking more and feeling better. Again, let me stress, this is what worked for me and I wouldn’t tell you to do the same unless somebody who actually went to school for this type of shit suggests you try it. I’m just some idiot with a computer and a giant cup of coffee. So don’t listen to me. How about these smart people? Or this study? Or how about this? 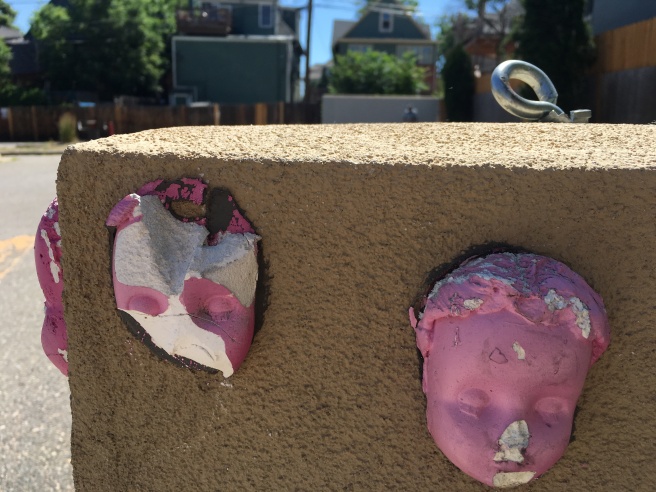 Really, the point of this whole spiel is not to convince you to Go Take a Walk America! Or some crap. It’s to tell you that me, this guy Sean with the big cup of coffee and the sarcastic attitude, feels better after he walks around his neighborhood. I don’t wear special walking clothes for godsakes. Nor do I belong to a walking group. Jesus. Anyway, it’s not just the health thing either. It’s also because as a writer I get to see so much more when I walk. Like the creepy pink baby heads above. Or this clever piece of vandalism:

Or people yelling at their kids or dogs. Or old people holding hands. Or flyers for weird shit I’m never going to but want to read anyway. I get to see my life up close when I walk and I get to confirm that it’s all pretty amazing.

Even bah humbug exercise me has a fitness app on his phone. On good days, I do over 10,000 steps. Over the last few days, it’s been closer to 25,000. This isn’t mentioned for applause or a special walking ribbon. Clearly, these numbers confirm that I’ve needed the extra help lately. I have been pretty honest about my dismay over the human race as of late and I’m walking that off too. Sure, I’m still me when I get home and the world still needs a brain transplant but I can be human and normal and in gratitude after a walk. Therefore, this how the story ends: I’ll keep walking. Maybe I’ll even bump into you. I’ll be the guy by himself in jeans and a t-shirt taking pictures of weird shit or saying hi to random dogs.