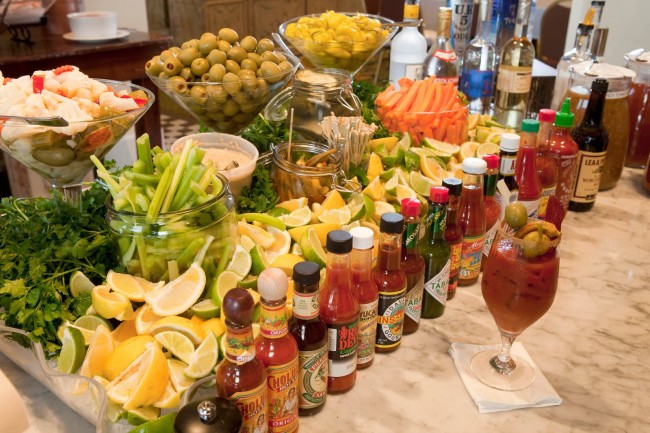 Of course, we were getting the potato pancakes, I replied.  The husband argued that the perogies we were also ordering already had pancakes in them. Wouldn’t that be overkill and maybe too heavy?  He was correct but also he was wrong. These were different crispy, potatoes more in the vein of a hash brown and therefore vital for the meal, the meal in question being brunch. Potatoes being a must at brunch is a hill a person with the last name of Mahoney will gladly die on. Having heard my 10 minute monologue on potatoes and brunch probably 400 times over the course of our nine year relationship, the husband gladly surrendered. He’s a brilliant man, despite being occasionally wrong about potatoes. My love for potatoes is legendary at this point so much so that don’t be surprised if one day I get exhausted from writing about myself and turn this into a potato-only blog. Spudologues, anyone?

My win on the potato pancakes aside (which were delicious, by the way), brunch in and of itself is a win for me. The meal for over a decade was a such a loaded gun invitation for day drinking and debauchery. Potatoes were merely a side character and played second fiddle to bottomless mimosas. Bottomless mimosas! Ha. From where I sat at the brunch table it was nothing but bottoms slugging back mimosas. And what a sad gutter gay drink the bottomless mimosa is. Cheap, headache inducing champagne (emphasis on the pain part) mixed with cheaper bar-well orange juice, the kind of juice that needs booze to taste like anything other that liquid heartburn. If it wasn’t mimosas, it was bloody Marys. Tomato juice is disgusting and we should collectively be ashamed ourselves for ever thinking juicing and drinking a tomato was good idea. How dare we. So why not throw vodka in it to really set off how gross it is? I have friends who are sober who tell me they loved bloody Marys. I gently say, no bitch, you liked getting fucked up. No one is drinking bloody Marys because they like the taste of it. Similarly, I want to to punch people in the neck when they say the same thing about kombucha. “I love the way kombucha tastes!’ No girl, you hate yourself and your taste buds.  I gracefully missed the era of the “Loaded Bloody Mary” which is filled with giant olives, shrimp, bacon, gummy worms and all kinds of other crap. Barf. The thought of a soggy piece of bacon in a glass of tomato juice and vodka makes me not only not want to eat brunch ever again but might turn me into one of those people who only eats fruit and never leaves their house. But in the same note, thank god for Bloody Marys and Mimosas. They validated my former favorite part of brunch: day drinking.

At the aforementioned brunch last weekend, the husband and I ordered our respective beverages. Coffee and water for me, which is of no surprise. Listen, I’m a 46 year-old gay sober, alcoholic. Coffee and water are all I care about. Sometimes if I’m at da club, I’ll get crazy and order a Diet Coke but that concludes my beverage repertoire. The hubs ordered some kind of specialty cocktail. He’s a normal drinker so he occasionally gets one drink just to be festive. What a weirdo. He’s completely missing all the fun by not having twelve drinks then texting a coke dealer right before he yells at random people in a liquor store parking lot. I mean why drink at brunch casually when you can get totally shitfaced and ruin the good time of those around you? Day drinking at brunch for me went down either one of two ways:

1.) I accepted the brunch invitation because I was so hungover that I knew that I needed food and more alcohol if I was ever going to be able to function. I’d usually leave with a slight buzz which was great because usually more drinking was on deck at either beer bust(another gay drinking institution that deserves to be murdered) or hanging out a dive bar or just drinking at home later. This drinking served more as an elixir and a coming attraction for the boozefests bound to happen later in the day.

2.) I accepted the brunch invitation with good intentions and tried to not drink too much but around mimosa number six (THEY’RE BOTTOMLESS, PEOPLE!) that aspiration went out the window and my dignity followed soon after. Drunk by 2pm, hungover by 4pm, napping by 5pm and resumed drinking by 6 or 7pm. Brunch really had a way of taking a whole day hostage. It was just supposed to be eggs Benedict but somehow morphed into a scene from Tara Reid’s old reality show Taradise.

Many a dumb website and magazine have poised that gays love brunch because of the socializing and the stylishness of the meal. I don’t know what fucking gays these people hang out with but for me and my girls it was usually about drinking. Yes, there would be potatoes on the plate and we would actually eat but the acceptability of day drinking at brunch had an allure too hard for this homosexual alcoholic to pass up. I think brunch and drinking and gays has to more with gay culture in general. My people really enjoy drinking, It’s a not talked about but well-known fact and well-researched too. If it involves cocktails, gay men want to be involved. It’s that easy. A few years ago, it was assumed that it was just the older generation of gays that liked to pound the cocktails but despite progress the numbers seem to indicate that young LGBT are at a higher risk for developing substance use disorders than their straight counterparts. So the problem is not really brunch per say but a community that suffers from addiction. Sigh. It’s bigger and a lot more depressing than just potatoes.

To answer the question posed at the top: of course we are. A few years back a friend told me, “We sober gays need to take back brunch!” I quipped, I didn’t know brunch went anywhere. We can’t take things back. We can’t take America back. We can’t take brunch back. There’s no coup coming of groups of sober gay men holding pitchforks and gluten-free waffles storming your local brunch spot. The revolution happens inside, baby. That’s a more exclusive guest list than any tired, homo brunch in NYC. The universe has gifted me with a group of magical sober gay men who do remarkable shit all day long without having to drink or use. They go through breakups sober. They go to drag shows sober. They face difficult battle with mental health sober. They even go to goddamn brunch sober. I told you they were magical.

Our potato-filled and laugh-filled brunch came to a close, not with me being pushed out of the restaurant and into a cab because I was too drunk, but with carrot cake. Because I’m a grown ass man who doesn’t drink or use drugs and this is how I do brunch now.

5 thoughts on “are sober gays even allowed to brunch?”