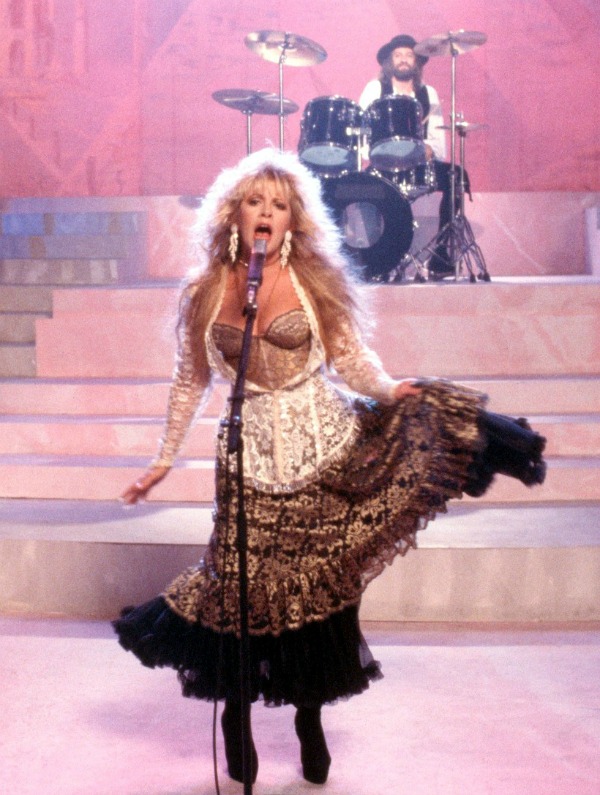 Not everybody I know who got sober drank at work. Not everybody I know who got sober did drugs at work. But I certainly did. As did my favorite rock goddess Stevie Nicks. Stevie also slept with Tom Petty and wore shawls to work, things I did not do–yet! I mean there’s still time! Actually, the shawls are more likely to go down than the Petty moment(shudder). Still, Stevie is such a longstanding influence on me that I wouldn’t count anything out. In fact, I’m a little shocked that I haven’t blogged about her here after nearly a year in business. She certainly came up multiple times at urtheinspiration. The thing I love about Stevie is that her songwriting has such layers. Beneath the witchy, lace and leather trappings are some real complex, emotional words. Her writing is unapologetic and truthful while always peppered with a little sadness just to round out the flavor.  Yet the song on my mind lately is “Seven Wonders” a song she didn’t even write for Fleetwood Mac.

The song comes from Fleetwood Mac’s Tango in the Night, two albums after their flawless in every sense of the word classic Rumors. Celebrating 30 years in release this spring, Tango in the Night has a spattering of memorable songs and is notable for being the last album the Fleetwood-Nicks-Buckingham-McVie-McVie lineup ever recorded together. Tracks like “Big Love,” the still solid “Everywhere,” “Little Lies”  and the aforementioned “Seven Wonders” were radio hits for a reason. Lushly produced by Lindsey Buckingham, each song is pure Fleetwood Mac and signs of a band who could pretty much phone it in after 14 albums together. This must-read Pitchfork review of the re-issue nails all the delights and disasters of Tango In The Night but let’s just say, as always with Fleetwood Mac, the back story nearly eclipses the record itself.

Knee-deep in a spiraling cocaine addiction co-founder Mick Fleetwood could barely be counted on during the recording of Tango In The Night while Nicks was out of rehab for her own coke problem but now filled to the brim with opiates. In a move that pre-dates the current opioid crisis, Nicks claims her doctor prescribed her Klonopin as a form of treatment for cocaine addiction. Per an article she wrote for Newsweek in 2011:

What this man said was: “In order to keep you off cocaine we should put you on the drug that we’re using a lot these days called Klonopin.” Stupidly, I said, “All right.” And the next eight years of my life were destroyed.

Naturally, Tango in the Night suffered. “I started not being able to get to Lindsey Buckingham’s house on time, and I would get there and everybody was drinking, so I’d have a glass of wine,” she writes. “Don’t mix tranquilizers and wine. Then I’d sing horrific parts on his songs, and he would take the parts off. I was hardly on Tango of the Night, which I happen to love.” Buckingham himself says of Nicks’ performance on the record, “Stevie was the worse she’s ever been.” Reports of Nicks being too drunk to record and having to have vocals patched together by Buckingham are now part of Tango in the Night’s legend.

Yet for all the drug soaked disasters on Tango in the Night, Stevie Nicks and “Seven Wonders” survives. The song had a major resurgence recently when it was featured on American Horror Story, catapulting it back on the Billboard charts. When you hear today in 2017, its pure Nicks. Written by her backup singer and collaborator Sandy Stewart, Nicks receives co-writing credit by default. According to SongMeanings, “While listening to the demo by Stewart (who did not provide any written lyrics), Nicks misunderstood the phrase “All the way down you held the line” as ‘All the way down to Emmeline’, which is what she sang and led to Nicks’ credit as co-writer of the song.” Classic Stevie. Like what the hell does her version even mean but wait who cares? It’s Stevie. We mere mortals are not meant to understand. Clearly, Stewart was well-versed in the mysticism and imagery of Stevie as the track features lines like “I’ll make a path to the rainbow’s end.” As far as Stevie Nicks Fleetwood Mac songs, it’s not one of the iconic greats. It’s no “Landslide” or “Gypsy.” But I love it for the shawl-twirling late 80’s rock sensibility. Plus, it’s catchy as hell. 1987 was the pinnacle for pop song earworms and “Seven Wonders” holds its own among them.  Knowing we what we know now about Stevie during the time the song was recorded, it’s impossible not to view it as a survival anthem.

Rich in the theme of a missed opportunity of fleeting love and happiness, you’d be hard pressed not to see how this relates to a person struggling with addiction. I can’t speak for Stevie but I know for me there were long stretches in my drinking and using and even in early sobriety, where I thought I’d never be happy again.  Love and happiness seem like fantasies when you’re just trying to stay alive. “Seven Wonders” taps into the this sentiment while hiding under the (presumably lace) veil of unrequited love. Plus, the legacy of the song is one of an artist in shambles, barely keeping it together. I certainly identify with wanting to show up but being too wasted to actually be any good. Equally profound is that Nicks has re-claimed the song in recent years and made it her own by performing it live. Talk about not regretting the past or shutting the door on it.

Upon the recent re-release of Tango in the Night, Rolling Stone posted the stripped down original version of the song. In it, you hear an artist fighting for her life but still absolutely killing it. She sounds determined, fierce and broken. It’s a stunning performance that proves that maybe the 8th wonder of the world is being able to escape our demons and survive ourselves. If it isn’t, than Stevie Nicks certainly is.

One thought on “a path to the rainbow’s end”