You know you are officially out of blog post ideas when the first thing that hits you when you sit down to write is, “Maybe I should do a list.” Immortalized and then quickly beaten to death by Buzzfeed, lists are a blog’s way of telling you, “Look, we have to make new content everyday and you have the attention span of a crack addicted squirrel so please enjoy this list about why we are all Kelly Kapkowski from Saved by the Bell.” I’ve been paid by online publications to make lists and it always feels a little cheap and dirty. Like really, I didn’t know I was this much of an easy whore that I’d take money to make a list, but okay.  I’ve even had well-intended and constructed essays get sent back to me with the note, “Is it possible to turn this story into a list?” Which of course it is and I do, like any good whore would. Well, darlings, 15 days into this little write everyday project, I’m now rethinking my snobbish stance on lists and could be turning this entire blog into an “all lists, all of the time” format until further notice.

Okay, that’s dramatic and I enjoy talking about myself far too much to ever let that happen. But y’all. Being creative is hard. As one of my favorite poems says, Consider shy Cezanne. Withdrawn, cranky Paul Cezanne created 900 some oil paintings, 400 watercolors and thousands of drawings, not to mention dozens of incomplete works. Plus, he worked in the field as a farmer. No wonder he dropped dead at age 67. Motherfucker was tired. Cezanne is often considered “an artist’s artist” and the guy who inspired everyone who came after him. His impossible creative work ethic mixed with his hipster dislike of people make certainly him #ArtistGoals. But it is indeed work and hard work too. 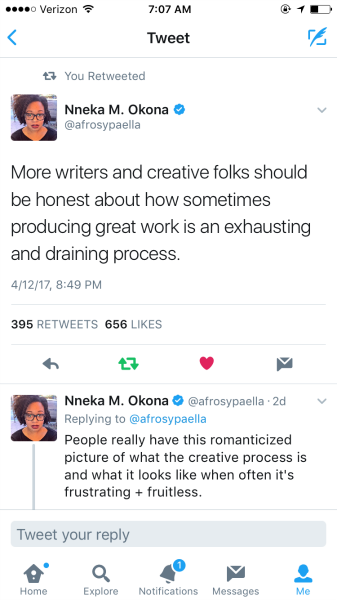 A few days ago, I stumbled on a the above tweets talking about creativity. While a lot of the time I spend on Twitter is spent trying not to hurl my phone across the room, this thread was the reminder and confirmation I needed that being creative isn’t as easy as we think it is. The creator of this thread is Nneka M. Okona who writes beautifully about travel, food and matters of the heart. Inside these tweets, something magical happened. People from all over we’re saying, “OMG. Me too.” Sounds simple but creativity and writing in particular, is more often than not solitary work. Our little one man bands run on nothing more than inspiration, our own creativity and a shitload of coffee. Tweet after tweet told my story of feeling like it’s hard not run out gas. One tweeter brilliantly described the exhaustion that comes with being creative as a “vulnerability hangover.” Perfection and it received and deserved multiple hand clapping emojis. But once, I’ve acknowledged that writing is hard work what exactly do I do to take care of myself and feed my soul? 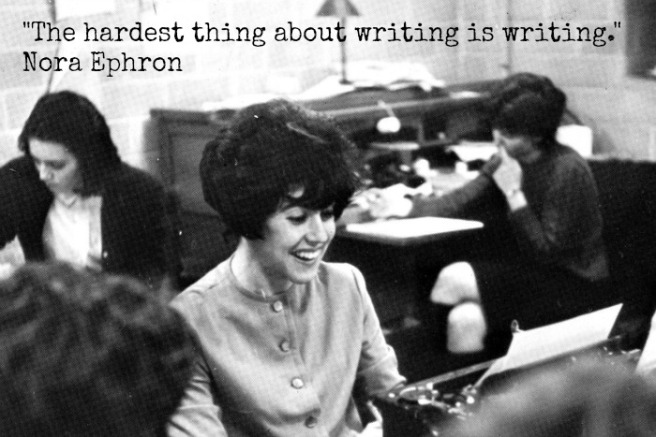 This week, walking, talking to friends and watching documentaries about creative people has helped immensely. My pal Claire who is also a writer (and a damn good one) has been an invaluable sounding board when it comes to talking about all things writing and she also enjoys a good walk so that kills two birds with one stone. And god bless Netflix and HBONow for currently having tons of incredible documentaries about all sorts of artists (one of which I wrote about here a few days ago). But the one that spoke to me as a writer was Everything Is Copy, currently on HBONow.

The film documents the life of writer and director Nora Ephron. The title, “Everything is copy” is an old family saying that Ephron’s mother coined meaning everything that happens in your life is just fodder for stuff to write about. Ephron herself adopted the saying and certainly used it as a career mantra. From her hilarious personal essays for Esquire to her hit book Heartburn, nothing was off-limits from Ephron’s life as long as it made for a juicy– and funny story. The concept is a good one and certainly one that between her and Carrie Fisher I have adapted in my own style. Telling the truth and laughing about it in my writing is my never-ending amends as a lifelong liar and delusional bullshit artist. The film pulls an emotional punch, however, when it comes to Nora Ephron’s death. Of all the things she talked about, death was the thing she kept to herself. Dying for months of leukemia, Ephron stayed uncharacteristically silent about what was happening. So much so that when she died those closest to hear were shocked and hurt. As it turns out, not everything was copy and some stories we need to hang onto for ourselves. It’s a fantastic watch and helped fuel me through several more posts.

Halfway through my daily blogging bonanza, I wish I could tel you something positive and inspirational about creativity and writing that would help you go write that novel you always wanted to write but I can’t. All I know is it’s a slog and it is hard work. But it starts when I sit down and just do it. And comparatively to say being an ice road trucker or washing windows on a skyscraper, it’s not that bad.  So I’m going to keep writing, one day at a time, like everything else. But tomorrow, you’re getting a list, dammit.