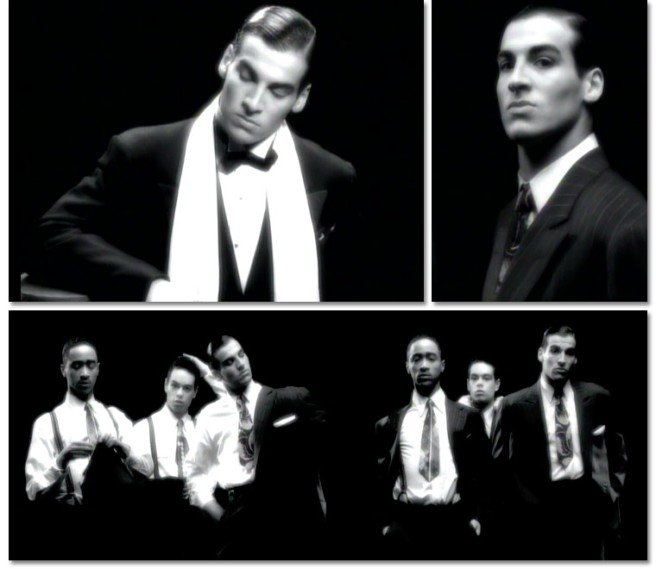 “Look, around. Everywhere you turn is heartache. It’s everywhere that you go.” Madonna,Vogue, 1990

It wasn’t the scene of Madonna simulating oral sex on a bottle. Nor was it the many scenes of her openly discussing her love life. It wasn’t even the scene where she turned “Like a Virgin” into a masturbating with a crucifix blasphemy filled ballad that people were talking about when they talked about 1991’s Truth or Dare. It was the scene where two of her male dancers kissed each other while playing the game in the title of the film. The sight of two men making out on the big screen was so nonexistent in 1991 that jaws dropped around the world when the film was released. Now over 25 years later, the story behind that kiss as well as the all the dirt on the tour, the film and the diva herself can be seen in the new documentary Strike a Pose, now on Netflix.

As a Madonna fan, I’ve been dying to see Strike a Pose since I read about it last year. The main reason being that Truth or Dare was seminal in my life as a gay teen trying to find the courage to come out. What that seemingly simple scene did for me and others like me was show that who we were was okay. Madonna and her dancers were presenting a life where you could be yourself and not give a fuck about what people thought. Sure sounded good to me, the terminally effeminate and unique soul that I was. Yet according to the film, that scene and the glamorous carefree life that came with it also came at a price.

Strike a Pose profiles the lives of six of Madonna’s dancers from the Blonde Ambition tour who were also featured in the “Vogue” music video. Luis, Jose, Salim, Carlton, Kevin and Oliver became instant stars during the tour and their fame exploded when moviegoers met them a year later in Truth or Dare. The movie takes an unflinching look at the past and pulls no punches especially when talking about the AIDS crisis. Two of the dancers, Carlton and Luis, tell heart-wrenching stories about how they were terrified to tell Madonna and other members of the company that they were HIV positive. Carlton found out in Japan while Blonde Ambition was getting ready to take over the world and Salim was diagnosed in 1987 but kept it hidden. Their stories are incredibly sad and ironic given that Madonna was vocal advocate for HIV and AIDS, having just lost her friend artist Keith Haring to the disease. These dancers were very young and I can’t imagine how terrifying that world was back then. Thus the story of Strike a Pose, after it gets done dishing the showbiz details, quickly becomes to a story I can really relate to: a story of survival.

How do you deal with the fall outs of instant fame? If we are to believe Strike a Pose, the answer is, not very well. These kids thrust into the spotlight were given all the drugs, booze and VIP access that they could handle and they rightfully took advantage of it. Naturally, things got ugly pretty quickly. Jose and Luis, who became minor club sensations with a record of their own, both got hooked on heroin and parted ways with Madonna after their addictions got out of control. For Carlton and Salim, the battle to stay well in a society where everyone with your condition is dying is a very real one, not helped by collective shaming and ignorance. In one of the films, more devastating segments, we’re introduced to Gabriel, the dancer featured, along with Salim, in that famous kiss. Gabriel died from complications of AIDS in 1995 at the age of 26. According to his mother, Gabriel wanted Madonna to cut the kiss from the film and after she told him to “Get over it”, he  went on to sue her for forcing him to come out. It’s an unsavory moment but not the only one. Kevin and Oliver also sued Madonna for compensation from the film. Yet the movie goes surprisingly lite on the Madonna bashing which is surprising given that her reputation as a difficult  boss and coworker is legendary.

It’s because of this however that Strike a Pose is effective and moving. By avoiding being a victim, bitchfest, Strike Pose turns into a portrait of growth. It isn’t about Madonna anymore. It’s about the six dancers and what happened since their worlds were turned upside down. Against the odds, these men have somehow stayed well, gotten sober and survived. Salim’s story, for me, is the center of the films’ heart and message of resilience. Still dancing and living in New York, Salim speaks  publicly for the first time about being positive and the result is a raw, tear-jerking emotional moment.

As a fan of Madonna and Truth or Dare, the movie delivers on the serving the desired nostalgia of the time. With clips of the film and access to the songs, the movie gives a fan what they want. But as somebody sober with HIV, the movie goes a lot deeper and soon becomes relatable and courageous. Gay men like myself have always been attracted to women who survive. Cher, Elizabeth Taylor and Tina Turner all had been through the ringer and counted out but somehow came back. It’s a glamour and toughness that we as gay men latch onto and find aspirational. Yet what Strike a Pose does beautifully is finally give gay men the fierce, empowered, truthful comeback story of their own.

2 thoughts on “‘Strike a Pose’ Strikes a Chord”