The urge to wade around in the pool of collective disenchantment of the times is certainly a strong one. “We’re all going to hell and everything sucks” is the underlying tone of nearly every social media post, newspaper article and talk radio monologue. The validity and truthfulness of this sentiment could be debated until our heads explode but one thing is clear it takes real humor, honesty and creativity to tackle the malaise of our times head on. Netflix’s BoJack Horseman does just that. Season three of “the animals living as humans acting like humans” in Hollywood sitcom premiered last week and cemented the show as one of the best on television. 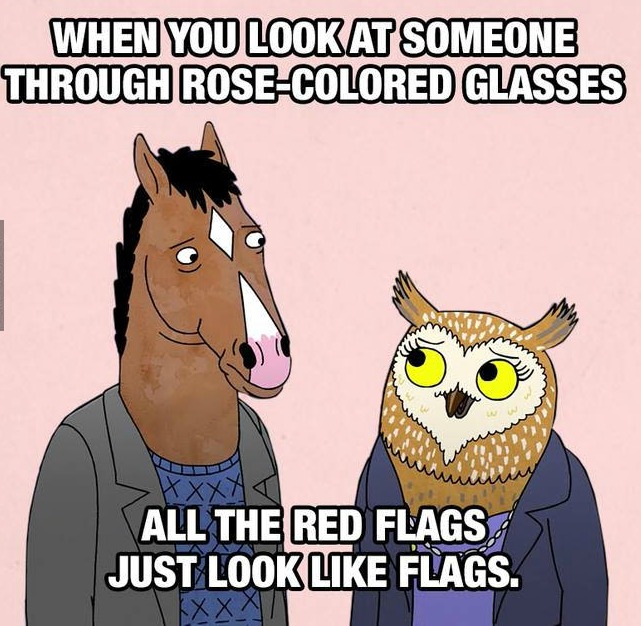 The show, if you’re unfamiliar, centers around a washed up 90’s sitcom star, BoJack Horseman(voiced with the ninja-like jerkiness by Will Arnett we’ve come to expect from the actor who should really win an award simply for playing an asshole better than anyone else on the planet), who is literally a horse and a man. BoJack for the first two seasons teeter tottered back and forth between comeback kid and full-blown train wreck. In season three, he gets to be both. Like many of us real humans, BoJack has a hard time with reality. He’d rather drink than be a good friend. He’d rather have one night stands than real relationships. He’d rather flee uncomfortable situations than face them head on. Needless to say, for this alcoholic in recovery who is not a horse but certainly a human in progress, I can identify. And that is the magic of this little sitcom. Even though it’s a Hollywood populated with animals, we see ourselves in these characters. we’ve all been a couch crasher like Todd or an optimist on the verge of delusion like Mister Peanutbutter or a workaholic who feels empty inside like Princess Caroline.  Season three ups the emotional ante not just for BoJack, who is busy working the awards seasons for his film Secretariat, but everyone around him. The people( and animal people) who populate BoJack’s universe are all disenchanted yet hopeful on some level and they’re all really, really funny.This all because of great writing and some terrific casting. From series regulars like Aaron Paul, Amy Sedaris and Alison Brie to brilliant guest stars like Angela Bassett, Maria Bamford, JK Simmons and Candice Bergen each performance in this funny/sad universe is pitch perfect.

Yet what really makes season three a knockout is the boldness. The show has found its footing and knows who it is. Therefore it can say and do whatever it wants. And it’s a glorious thing. For example, an honest and jaw-dropping episode about Diane, BoJack’s cynical yet loveable writer friend, getting an abortion is the television conversation we’ve always wanted on this topic but somehow could never figure out. The aforementioned Bergen stars in the sublimely ridiculous yet profound episode “Stop The Presses” wherein BoJack tries to cancel his newspaper subscription but winds up getting a free therapy session. Oh and how can we not mention what the internet is calling the “underwater episode.” Episode 4, “Fish Out of Water” is so darn creative and good that every site from Vulture to AV Club and beyond has already sung its praises. Done with nearly no dialogue while invoking Lost in Translation and Charlie Chaplin films, the episode deserves every inch of blog real estate that it currently occupies. 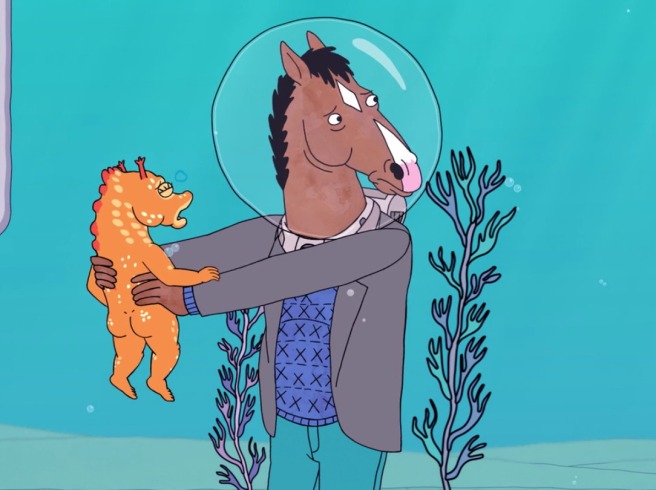 BoJack Horseman might be a brightly colored animated world where the line between humans and animals gets gleefully blurred (the show has a really good time playing with animal sensibilities in human environments like a car filled with sardines in business suits) but the emotional terrain is meaty enough to keep you captivated. Great sitcoms (like the Mary Tyler Moore Show or Seinfeld or Golden Girls) have always had an ensemble facing the challenges of their personalities while trying to make the most of whatever life throws at them. BoJack Horseman does that for sure but it also is a truthful mirror of our times. The universal feelings of “less than” and “fuck it” are widespread right now and it helps BoJack resonate even louder. Will its addicted, dysfunctional characters stand on their own in a less cynical, post-Trumpism era? It’s hard to say. But for the time being, there isn’t a better group of people, or animal-people to hang out and commiserate with.