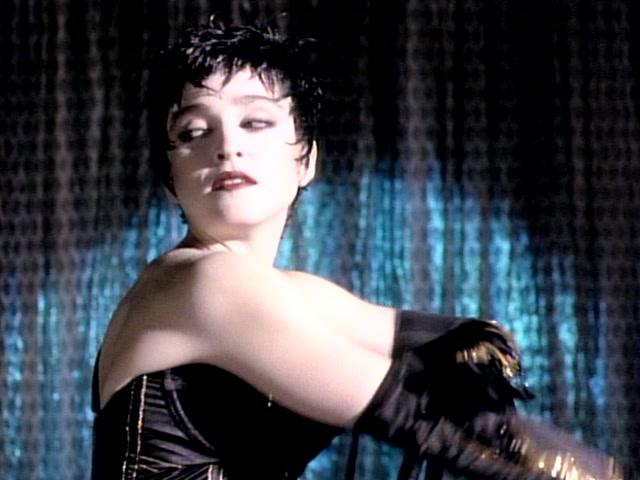 30 years ago today, True Blue by Madonna was released which makes it official: It was a really long ass time ago when I was a teenager and there’s no turning back. I was 13 that summer. If I seem spastic and kinda wacky to you now, multiply that by 80 and you’ll get me at 13. Awkward, effeminate and a neon glitter crayon in the box of Crayola primary colors. I hadn’t really started to think about sex and I’m sure on some level I knew I was gay but at 13 I was still holding out for the possibility that I might develop magical powers and would be able to forgo life’s more difficult moments. I was always a realist.  Thankfully, the music of the era facilitated escape while being properly dramatic in a way that 13-year-old me could really identify with. True Blue fit that prerequisite like a lace fingerless glove.

Take the first single off the record, “Live to Tell”, for example. As kids we honestly wondered, “What the hell is she talking about?” The song didn’t make sense but by the music video but by her dowdy appearance, we knew it was serious. Don’t take my gay card/Madonna card (active duel member since 1991!) when I tell you I don’t always love Madonna ballads. There often too mopey. Her vocals grating. The lyrics goofy. And I felt that way about “Live to Tell”. However, the song’s legacy has endured. Madonna said,”I thought about my relationship with my parents and the lying that went on. The song is about being strong, and questioning whether you can be that strong but ultimately surviving.” Definitely the kind of stuff “the kids” who were buying records at the time could relate to. Later, Madonna used the song for people with HIV and AIDS and to represent political oppression. When I listened to it for this piece, I still don’t love it. It’s still melodramatic. It’s still kinda silly and way too long but I can appreciate it for what it is.

The song we were all really talking about that summer was “Papa Don’t Preach”. An upbeat dance number about teen pregnancy (only in the 80’s). The song was escandalo for me and my group of catholic school friends. Just hearing it on the radio, I worried about going to hell. But to be honest, I didn’t worry too much about it. I thought just being a Culture Club fan had sort of sealed the deal on that end, not to mention the whole being in love with boys thing. The song, in 2016, is harmless but the moxie and attitude Madonna was cultivating at the time still blasts through the speakers at full force. Plus, who doesn’t love those strings in the intro?

For me, the song that captures the isolation and invisibility of being a thirteen year-old is “Open Your Heart”. Despite the stripper-peep show-dancing with a child video, the lyrics of the song as well as her delivery just nail that feeling of wanting to be noticed and paid attention to. Lyrics like, “I follow you around but you can’t see. You’re too wrapped up in yourself to notice”describe my relationship with pretty much every older kid I wanted to pay attention to me or boy I wanted to be friends with. Although nearly 28 at the time, Madonna got it and knew that my 1980’s tween struggle was real. The song describes wanting to loved by someone emotionally unavailable and given what we know now about her then relationship with Sean Penn, the tune might be more autobiographical than we gave it credit for back in 1986. “Open Your Heart” is a peek at the songwriter Madonna was on the way to becoming that speaks to the loneliness and desperation of teens everywhere.

True Blue is often called Madonna’s most girly album. The title track certainly reinforces that label. Bouncy, poppy and sugary, it’s the musical equivalent of a jelly donut. By the way, peep actress Debi Mazar in the video above! Ditto for two other songs on the record “White Heat” and “Jimmy Jimmy”respectively which show Madonna’s love of old movies. “White Heat” features Jimmy Cagney samples while “Jimmy Jimmy” tells the imaginary tale of a teen romance with James Dean. Keeping in line with femininity and high drama, “La Isla Bonita” was a huge hit. The sing predates latin pop songs by the likes of Jennifer Lopez and Ricky Martin by over a decade and remain a karaoke favorite by white girls everywhere. As she twirls her dress around in the video by all of those candles, you worry about her safety (Stop, drop and roll Madonna!) but the song is still a spicy guilty pleasure.

Like thousands of gay kids from the 80’s, Madonna was big part of growing up and coming out of the closet.True Blue predates those two things by a few years but at the age of thirteen spoke to my soul. Today, in my forties, It’s still a solid listen. It serves as timecapsule for sure. Hearing the lyrics and watching the videos, I was transported back to those awkward 13 year old days. As an artist, her best days were ahead of her (Like A Prayer, Ray of Light and Confessions on a Dancefloor being my top three albums were yet to come.) and as a teenager, my tastes would shift to the darker and even more emotional (the Smiths, Siouxsie, Bowie) but I always came back to Madonna.

While researching this piece, Orlando was all over the news. These silly songs didn’t feel so silly. But then again nothing did. I’m lucky to have grown up and come out in an era where artists like Madonna were saying “Be who you are and love who you are and fuck anyone who doesn’t get it.” So for all it’s dated synthy pleasures and theatrical lyrics, True Blue and message of its artist, might be something we need now more than ever.