This is a train story.

This a travel story.

This is a horror story.

This is a love story.

This is a train story.

We, the husband and me, decided we needed to get the hell out of Dodge. Okay we don’t live in Dodge and I’m too lazy to look up where that expression comes from. But we needed to leave town. Not because we’re on the lam or because we accidentally murdered someone. We  simply needed to GTFO of Denver for a few days to breathe. A couple of months ago, we booked a train to go up to the mountains. Me the lover of old movies and reader of books has always romanticized the train in my mind. I have ridden trains in the past and somehow I always forget their kind of sketchy, sort of smell bad and pretty unreliable. My mind, instead, shoves trains into some unrealistic Ingrid Bergman Movie folder. Just hand me a magically never-ending cigarette and a jaunty hat and I will be on my way. All aboard!

This is a travel story.

In this, our fifth year of marriage, we made a decision to travel more. The thought hit us last winter when we were freezing our asses off that maybe we should go somewhere warm. Since then, we’ve made it a priority. Or more of a priority, shall I say. Travel has always been a part of our relationship. When we first met I was living in Los Angeles and he was living in the town I was born in Denver. After a few months of mutually bouncing back and forth between the two towns, we decided we had to make a decision. We picked Denver because of my family being here as well as Michael’s job and because of the ridiculously cheaper rent in comparison. From New York and San Francisco to Santa Fe and several times back to my old stomping grounds in Los Angeles, travel has continued to be something we love to do together. I mean without tooting our own horn (blowing our own train whistle as the case may be) we’re pretty good at the whole travel thing. We don’t yell at each other in airport terminals. We know when to shut up and let the other one read or nap. We keep each other sane during some of travel’s more mundane and annoying delays.  And during this train ride, we needed to pool all of those talents to hang onto our sanity.

The ride was supposed to be a little over six hours with a nice view of the mountains and little towns on the way up. After a delay, leaving the station downtown we were off to a slow start chugging slowly through train yards and downtown outskirts. I hadn’t been on a train in a while but it didn’t seem like this old fella was running at full capacity. But what the hell did I know? My actual knowledge of trains existed only in fiction.

My instinct was right. Something funky was going on with our train. About two hours into the ride, around 11am, we stopped. Stopped like completely stopped moving. An announcement, the first of thousands, came on to inform us that something with the engine went kaput. We were going to have to wait for someone from Denver to come up on another train to bring a new engine. Shouldn’t be more than an hour or two. At this time, I’d like to direct you, dear reader, to the photo at the top of the page. That’s my husband looking at the pile of rocks and mountain scenery we would be staring at for the next 6 hours.

This is a horror story.

Somewhere around hour five when the girl in front of my was picking unknown matter out of her arm with turquoise colored tweezers, I feared I had lost my mind. We left our house at 6am and it was now 5pm. The other passengers marched around the train cars like the undead from some zombie movie. I’m vague with the reference here because I’ve never seen a zombie movie. No, really. I haven’t. The concept of zombies just doesn’t scare me. Things that could actually happen like getting killed by a freak who escaped from a mental institution while you’re babysitting on Halloween or a shark eating you or aliens killing everybody but Sigourney Weaver. Or getting trapped in a train with no cell service. Those things scare me. Zombies? Not so much. But I digress. The point was people walked aimlessly from train car to train car. Some passed so many times we wondered if there was more than one of them, like twins or clones. Like the white guy with cornrows who must have done the Amtrak equivalent of a half marathon. The idea of multiple white guys on the train with cornrows was hysterical to Michael and I. But then again, everything was funny after looking at the same pile of rocks for hours on end. The never-ending announcements for dining car reservation were hilarious. Ditto the guys with bowl cuts and carpenter jeans and suspenders who were clearly having a walking competition with Cornrows. A kid outside on a scooter, who we joked rode all the way to Denver and back while we stayed in the same place, was also comedy gold. Even for our sad face selfie, I couldn’t stop laughing. 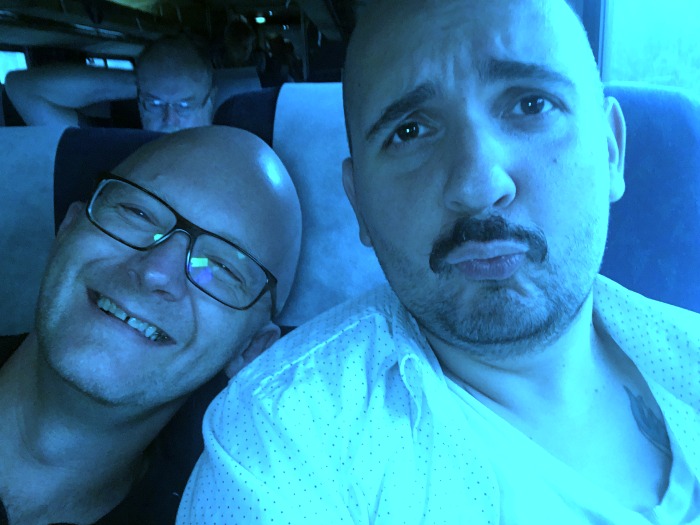 I had to rally,accept our utter stuckness and lean into the ridiculousness of the day. I mean if the really angry guy behind us with the perm, mustache, jorts and Pink Floyd t-shirt could keep it together, so could I. With no cell service and the inability to tweet (the horror!) we had to laugh and lean on each other in lieu of totally mentally collapsing. Somewhere around 7pm-ish, our luck started to change. The engine from Denver showed up! We finally made it to our first stop! And the amazing full moon and sunset were happening just as well pulled in. As the smokers who looked as if they were ready to murder someone puffed away furiously, I snapped this picture.

We finally got to Glenwood Springs at 1am. We were supposed to get there at 2pm. Our sense of humor saved us as did our ability to adapt but mainly I was saved by being stuck with my favorite person on the planet.

This is a love story.

Being ninja travelers, we know shit like this happens. We’ve been stuck in airports and bus stations. We’ve had to not just move to plan B but like plan H or plan Q. Yet Michael is such excellent company, I didn’t mind. Sure, the train started to stink and I worried that the walking zombies would soon revolt but the guy next to me made me laugh or held my hand at all the right times and that’s all that mattered. Once we arrived at our destination, we collapsed and our hotel. We spent the next 3 days soaking in hot springs, eating and generally loving each other’s company, just like we did trapped on the train. It’s safe to say our three spa days melted away the stress of travel. It might have also melted away my romance with trains too. But my romance with travelling with my favorite person? Very much alive and better than ever.

2 thoughts on “Long Train Running (or not)”