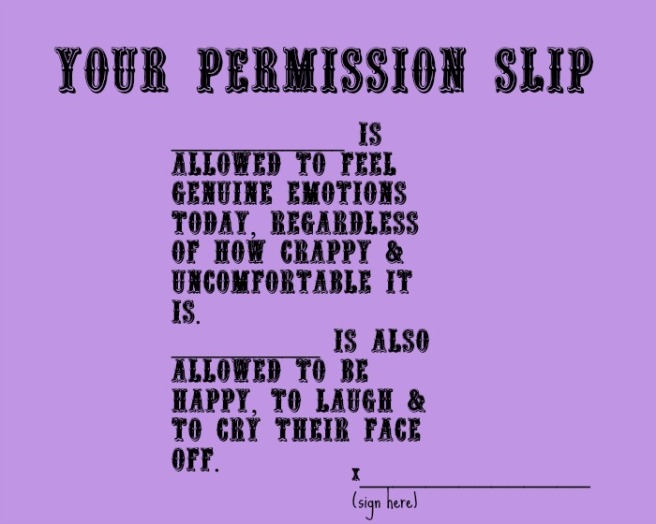 Yesterday sucked. I know this late-breaking news for you. But yeah. Yesterday was horrible. And there’s something freeing in just saying that. For me,anyway. I spent a long, long, long, time acting like everything was okay and dealing with the toxic fallout from that kind of delusion. So now when things are really sad and fucked up and totally senseless like yesterday’s shooting, it’s a gift to be able to say, “I am in pain and this sucks.”

And that’s what I did all day yesterday. My morning started with me at a meeting. I did not want to share. I just wanted to be with other people used to drink or use drugs whenever terrible shit would happen so that’s what I did. Thankfully a woman talked and ended her share by saying, ” I just want to take 10 seconds of silence for the people who died in Orlando.” Well that fucking did it. The tears ran down my face and I straight up did not care. I cried the rest of the meeting and cried when I thanked her for her share. She looked at me like I was crazy/like she felt really bad for me. Again. Didn’t care. Later on, at home I sent out text message carrier pigeons to all the people I knew would get what I was going through: My sponsor, who told me that crying was a good thing. My bestie in LA who was devastated and told me not to be alone. Another queer person from the program who told me they got. And all of my online homies who were crying alongside me. I cried at work as texts from playwright friends came in which also said how sad they were and how awful they felt. A lesbian couple came into my work and we were all mutually really nice to one another. We were laughing and generally chatting like we’d known each other for decades. But what it felt like we were saying is , “I know. This is terrible. I love you.” Much later back at home with a chocolate bar in hand and Game of Thrones on my television, I got a text from a family member who just wanted to say they loved me and that they always had and they were thinking of me and Michael all day long. More tears.*

The point is, despite my years of acting like everything was peachy, I felt my emotions yesterday. No it wasn’t fun but it felt appropriate. It felt appropriate to mourn the lives of 50 people I did not know. It felt appropriate to feel scared and angry and depressed all at the same time. It felt appropriate to reach out. This is still new behavior for me. Back in the day, everything from September 11 to the death of someone else’s family member was dealt with at a bar. Not coping was my way of coping.  That’s a hideous strategy, by the way. It only means that you’ll numb yourself into being an emotionless, alcoholic cyborg and when you finally do deal with your shit, it’s turned into some kind of demon that multiplies the longer it’s left in the dark. Yet I feel like we all still need permission to actually feel shit like a human being. At least I do. Having my sponsor tell me to keep crying yesterday immediately poured gasoline on my old cyborg circuitry. Being a human is some messy ass business and yesterday I felt like I was given a pass to do that.

Therefore I would like to extend the favor. Please cut out the slip at the top of this page and use it to feel whatever the fuck you want. If you are heartbroken, use it. If you are angry, use it. If you had something really good happen and feel bad about being happy, don’t and use it. But mainly don’t let people, including my bossy self, tell what you need to feel. This slip also allows you to be a white woman who identifies with Beyonce’s Lemonade even though they tell you cannot. This slip lets you cry for people in a foreign land whose lives are torn apart by war even though you are thousands of miles away. Finally, the slip lets you feel anything you want for the people killed at a gay bar in Florida yesterday even though you might not be gay or from Florida or even American. Plus, it never expires.

Which is good since I plan on using the hell out of mine.

*Actually crying when I wrote that sentence.

5 thoughts on “Your Permission Slip”